I’ve been doing lots of reading/research lately for my new projects, a new full-length novel and an “Undone” short story to go with it set in the Elizabethan theater scene! (Alas, they’re both still untitled…) In my reading I noticed that on this day in 1613 the first Globe Theater burned down (this won’t be happening to my fictional theater in the book!). So I thought I would share a bit of my notes for this Tuesday post.

Old property records and the discovery of some of the archaeological remains indicate the Globe was sites from the west side of modern Southwark Bridge, east as far as Porter Street and from Park Street south to the back of Gatehouse Square. (Its site was only speculation until part of the foundation, including one original pier base, was found under the Anchor Terrace car park on Park Street in 1989. The materials and some of the shape could be analyzed and preserved, but since most of the foundation lies under another listed building it couldn’t be further excavated).

The Globe was the playing house of the Lord Chamberlain’s Men, a troupe owned by actors/shareholders. The main shareholders, brothers Richard and Cuthbert Burbage, owned 25% apiece with four actors owning 12.5% each (Shakespeare, John Heminges, Augustine Phillips , and Thomas Pope. Originally the comedian Will Kempe was intended to be the 7th partner, but he left and sold out his shares to the 4 minority holders. New sharers were added over time). It was built in 1599 using the materials from The Theatre in Shoreditch, built in 1576 by the Burbages’ father James on land which originally had a 21-year lease (but the building he owned outright). But the dastardly landlord, Giles Allen, claimed the building became his on the expiration of the lease, leading to a protracted legal battle. Thus on December 28, 1598, while Allen was out of town for Christmas, the actors dismantled The Theatre and transported it to a warehouse near Bridewell. With the arrival of warmer spring weather, the pieces were ferried over the Thames and reconstructed as The Globe on some marshy garden plots south of Maiden Lane in Southwark!

The Globe’s actual dimensions are unknown, but evidence suggests it was a 3-story, open-air space about 100 feet in diameter that could fit in about 3000 spectators. In a famous sketch of the period done by Wenceslas Hollar it’s shown as round, but the excavations show it was actually a polygon of 20 sides. At the base of the stage is the pit, or yard, where for a penny the groundlings would stand on the dirt, rush-covered floor to watch the play (and eat and drink and fight). Around the yard rose 3 levels of stadium-style seating, each level more expensive (audience members would pay at the door of their chosen level). There were also private boxes for very wealthy people.

The stage, an apron-style thrust stage, went out into the middle of the yard and was about 43 feet wide, 27 feet deep, and raised about 5 feet from the ground. In the middle was a trap door for ghosts and such to enter the scene. Large, faux-marble painted columns on either side supported the roof over the rear of the stage (the ceiling of this was called the “heavens” and was painted to resemble the sky. There was another trap door here where actors could be lowered using a harness–literally a deus ex machina!). The back wall had two or maybe three doors at the main level, with a curtained inner stage in the center and a balcony above. These doors went into the tiring house, a sort of green room where costumes could be changed and actors waited for the cues. Musicians used the balcony and it could also be used as scenery (like the balcony scene of Romeo and Juliet). 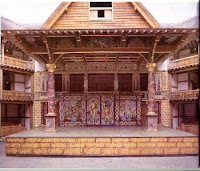 This Globe had a glorious run, seeing the premiere of most of Shakespeare’s great plays as well as hundreds of works now lost (or at least more obscure!). But on June 29, 1613 the thatched roof was set on fire by a cannon fired in a performance of the play Henry VIII and the Globe burned to the ground (though no lives were lost!). By then Shakspeare was mostly in retirement in his fine new house in Stratford, and would die 3 years later. The Globe was built again in 1614, with a tile roof replacing the thatch. In 1642 the new Puritan government closed down all the country’s theaters and the Globe was pulled down to make way for tenements. It came back to life in 1997, about 750 feet from the original on the banks of Thames. 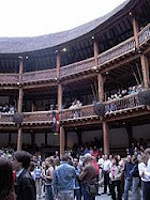 In my book, the heroine’s father is an entrepreneur theater owner (much like James Burbage or Philip Henslowe) and the hero is an actor/playwright/troublemaker/spy, so I’ve been having a wonderful time reading about the bawdy, wild, genius world of the Elizabethan theater! Originally I had the idea on my trip to London a couple years ago, when I got to attend A Midsummer Night’s Dream at the new Globe. I knew I would have fun there, but I didn’t expect how magical it all would feel! If I ignored the modern dress of the audience, and the fact that really they were all very polite (no throwing of anything on stage or stuff like that!) I could almost imagine being transported back to the 1590s. It’s a very different feeling from modern theater-going, it seemed more intimate, as if the audience was part of the action onstage. And the actor playing Lysander was very dishy. :))
Here are a few books I’ve been using as I get into the story:

JR Mulryne and Margaret Shewring, Shakespeare’s Globe Rebuilt (1997: lots of great, in-depth info about the evidence of the original Globe and how it was used and adapted for modern requirements in the new Globe)

Julian Bowsher and Pat Miller, The Rose and the Globe–Playhouses of Shakespeare’s Bankside, Southwark (2010–a brand new publication from the Museum of London which someone kindly sent me, it’s great)

Thomas Dekker, The Gull’s Hornbook (1609, reprinted in 1907–a fabulous source for the very colorful life of the Elizabethan underworld!)

RA Foakes and RT Rickert, eds, Philip Henslowe’s Diary (1961–a must-read for anyone interested in the theater of this period)

Richard Dutton, Mastering the Revels: The Regulation and Censorship of English Renaissance Drama (1991)

18 Responses to Adventures in Theater