The Riskies are happy to welcome back Cara Elliott, who kindly agreed to blog about the background of book 2 her “Circle of Sin” series–To Surrender to a Rogue! Comment for a chance to win a copy…

It’s a pleasure to be back visiting the Riskies! Yes, yes, I know–I was just here in March, but after a long interlude between series, the first two books of my new trilogy have been released close together. So I’m back to talk about To Surrender to a Rogue, which takes place in Bath amidst an archaeological excavation of Roman ruins.

The “Circle of Sin” features 3 beautiful, brainy female scholars who each has a dark secret in her past. The first book, To Sin With a Scoundrel, highlighted Ciara, the chemistry expert. The current release tells Alessandra’s story. She’s an expert on ancient antiquities, a subject that has fascinated me since I saw a PBS documentary on the Pyramids when I was very little. (I disntinctly remember many days of climbing the hill behind my elementary school during recess, pretending that I was an intrepid explorer scaling the rough-cut rocks to the pinnacle!)

I also have a soft spot in my heart for the hero’s passion. Jack is a highly talented watercolorist, and as art is my background, I’m going to eschew talking about the techniques of digging in favor of painting a brief picture on the subject of pigment and papaer. So without further ado… 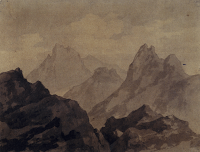 Most Regency stories depict watercolor painting as a proper pursuit for young ladies–which it was. However, it was also a subject of serious study for young men. One of the leading watercolorists of the 1700s, Alexander Cozens, taught at Eton for years. In addition to producing hauntingly beautiful works of his own, rendered in an austere, monochromatic palette, he shaped the artistic tastes of a whole generation of English aristocrats. Two of his pupils, Sir George Beaumont and William Beckford, are reocgnized as two of the greatest collectors and connoisseurs of their age.

The Royal Academy, which was founded in 1768, recognized the medium, but for the most part its practitioners were treated as second class citizens by the artists who worked in oil paints. Tired of being dismissed as mere craftsmen rather than creative talents, a group of artists banded together and made a bold move, establishing the Society for Painters in Water-Colours in 1804. (In previous centuries, watercolorists traditionally worked with mapmakers and were seen as recorders of topographical scenes). They held their own shows, which proved to be a critical and financial success. From JMW Turner and Thomas Girtin’s evocative use of color and texture in landscapes to David Roberts’s striking depictions of exotic travel destinations, Regency watercolorists were embraced by the public as true artists. (Roberts in particular served as a model for my hero–his paintings of classical sites in the East were wildly popular with a British audience whose travel opportunities were severely limited by the Napoleonic Wars).

Okay, so many of you have probably dabbled in “watercolors.” But the stuff of grade school art class is a far cry from the “real” thing. So here is primer on the materials and techniques that Regency artists used to create their richly nuanced paintings:

As opposed to oil paints, watercolors are transparent, and an artist builds color, texture, depth and shadow by layering washes of pigment. (There are opaque watercolors, which are made of pigments mixed with white zinc oxide–these are called “body color” by the English, but are more commonly known by the French name of gouache. However, that’s another subject!). Transparent watercolor “paint” is made up of finely ground mineral or organic particles, bound together with two maind additives: gum arabic, which helps adhere the pigment to the paper, and oxgall, a wetting agent which helps disperse the pigment in an even wash. In Regency times, the pigments were formed into a solid square or cake, which would be carried in a wooden paint case. (Tubes of viscous paints were invented by Windsor and Newton in 1846).

An artists would dip his brush in water, then dab it over the block of pigment to dissolve it. The amount of water used determines the intensity of the color. Most artists start with very light washes to lay in the basic elements of their composition, then build depth and details. There are a vast array of pigments, and their names are wonderfully evocative on their own–alizarin crimson, yellow ochre, Vandyke brown, cerulean blue, to name but a few.

If you look closely at a watercolor painting, you may see a faint tracing of lines beneath the color. Many artists used graphite pencils to make a preliminary sketch of the subject. Charcoal (the solid carbon residue from charred twigs heated in an airtight chamber) or black chalk (carbon mixed with clay and gum binders) were also used. They produced a softer, but usually darker line. For some artists, these line sketches were deliberately strong and were used as an intergral part of the finished painting.

Paper is an important component of a watercolor painting because its texture affects the look of the washes. James Whatman created “wove” paper in the 1750s, which quickly became popular with the artists. Wove paper uses a fine wire mesh screen as a mold, making a finer surface than the earlier “laid” papers. This allowed a more uniform wash. (Whitman is still a highly regarded brand today!). The paper made by Thomas Creswick, which offered a rich assortment of textures, was also popular. Another favorite was “scotch” paper, made from bleached linen sailcloth. It had a more rustic feel, and featured imperfections such as specks of organic matter that some artists felt added more interest to their paintings.

Brushes are made from a variety of furs. During the Regency, squirrel was favored for soft, wide brushes designed to lay in broad washes. But the very best ones were made of asiatic marten–or Russian sable–as they held their shape very well and could be twirled to a very fine point in order to paint in detail.

So, now that you’re all art experts, which do you prefer–watercolor or oil painting? And do you have a favorite artist? I’m a big fan of Turner and Constable (both of whom painted wonderful images in both mediums).

To celebrate the release of To Surrender to a Rogue, I’ll be giving away a signed copy of the book to a lucky winner!