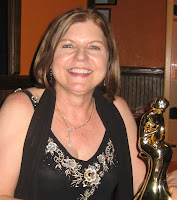 Today’s my day to talk about The Diamonds of Welbourne Manor and, remember, comment for a chance to win a copy of the book! Deb did a great job yesterday of explaining how the anthology came about.

Here is how I introduced the anthology on my website:

When the Duke of Manning ran off with Lady Linwall it had been the scandal of its day. Did they care? Not at all. Their home, Welbourne Manor, soon housed a happy miscellany of his and theirsâ€”but not hers, not the young son she left behind. Now all the children are grown, this estranged son is on their doorstep, and all their lives are about to change.

Riskies: What did it mean to you to write an anthology with two friends? 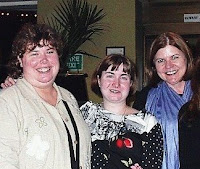 Oh, this has been my BEST writing experience by far! Amanda, Deb and I have been friends for years. In fact, Amanda was my first mentor! She had just sold to Signet and, as part of the Beau Monde (Regency) Chapter of RWA, she volunteered to mentor somebody. Lucky me! We mostly became friends and when Patty Suchy of Novel Explorations designed a Regency Tour of England, we decided to go. That’s where we befriended Deb.(here’s a photo of us in Brighton). I can’t tell you how happy I was for Amanda and Deb to become Harlequin Historical authors. What is wonderful about the Harlequin Historical team is that they knew we were friends and that’s why they offered us the anthology.

Riskies: What was it like to write connected stories? What was the most difficult?
It was sooooo much fun. First we had this great time wandering all around Colonial Williamsburg, soaking in the history. We spent a long time at the printing press, which was great because I learned what I needed to know for Scandalizing the Ton. When we finally went back to the hotel (and saw Deb’s first book, Scandalous Lord, Rebellious Miss), the story idea for the anthology came very quickly. I knew exactly whose story I wanted to tell. It was as if Brenner, hero of Justine and the Noble Viscount, was telling me his story.

What was hard was to make sure we got all the details right. I was especially worried about getting Charlotte’s and Annalise’s characters right, because I wanted them to seem like the same people in my story as they became in their own.

Riskies: Tell us about

Riskies: What was risky about your story?
I had to make Justine and Brenner fall in love in the midst of significant grief and emotional upheaval, which is not the best circumstance for romance. It made me uneasy to try to create a love story in this atmosphere, but I totally believed in the story Brenner was telling me!

Riskies: Whatâ€™s next for you?

The first book, as yet untitled, of my “Soldiers’ Trilogy” will be released December 2009. Three soldiers–an ensign, a lieutenant, and a captain–share a ghastly and distressing experience after the battle of Badajoz, an experience they agree to keep secret. It affects the rest of their lives. The first book is the ensign’s story and you get a peek of two of the minor characters in my Undone, The Unlacing of Miss Leigh. (Hint: my heroine in the book is an actress)

So, what do you think? Do you believe two people can fall in love in the midst of grief and emotional upheaval? Do you think it’s wise of them to do so?

Comment for a chance to win a signed copy of The Diamonds of Welbourne Manor!

This just in!
Thanks to Deb’s reminder, the Fitzmanning Family diagram is now added to my Behind the Book feature for Justine and the Noble Viscount.

and don’t forget to visit eHarlequin for Deb’s Online Read, The Journey to Welbourne Manor.

Diane Gaston is the RITA award-winning author of Historical Romance for Harlequin Historical and Mills and Boon, with books that feature the darker side of the Regency. Formerly a mental health social worker, she is happiest now when deep in the psyches of soldiers, rakes and women who donâ€™t always act like ladies.
View all posts by diane →
This entry was posted in Uncategorized and tagged Amanda McCabe, Deb Marlowe, Diane Gaston, The Diamonds of Welbourne Manor. Bookmark the permalink.