As I mentioned earlier, I just enjoyed the most relaxing vacation. One of the best parts was being able to catch up on a number of books I’ve been wanting to read, some of them romance classics in the I’m-ashamed-to-admit-I-haven’t-read-that category.

I started out with our own Diane’s THE MARRIAGE BARGAIN. It’s a classic Regency romance, beautifully written (no surprise there!) with heartfelt passion and intriguing secondary characters who are clearly heroes-in-waiting.

Having loved MISS WONDERFUL, I was eager to read Loretta Chase’s MR. IMPOSSIBLE and I wasn’t disappointed. It’s set in Regency Egypt (how’s that for different?), the characters are adorable, the dialogue witty, classic Loretta Chase. Now LORD PERFECT is beckoning from the TBR shelf. 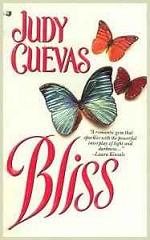 On the recommendation of one of my CPs, I tried BLISS by Judy Cuevas (who more recently writes as Judith Ivory). This book is so different and so risky. It’s set mostly in France, in 1903, a time period one rarely sees in historical romance. The hero is a blocked artist, an ether addict and impotent. The heroine seems–at first glance–like a rather superficial adventuress. Cuevas/Ivory is brilliant enough to bring out layers and layers of these characters and pull it all off. It’s beautiful.

The next book I read was MY SWEET FOLLY by Laura Kinsale. First let me say (for anyone who doesn’t know this already) that she is and always will be one of my favorite authors. However, I have to agree with other readers who thought the prologue was beautiful and the rest of the book disappointing in comparison. According to her website, Laura wrote this book during the worst of her battle with her muse and doesn’t remember much of it. Without knowing the circumstances it’s hard to say if anything could have helped, but I wish that somehow she’d had the chance to rest, relax, regroup, whatever she needed to work it out. Anyway, Laura Kinsale on autopilot is still better than many authors. And that prologue is a gem.

The last book I picked up was THE PROPOSITION by Judith Ivory (aka Judy Cuevas). It’s her RITA-winning Victorian historical featuring a hero that’s a rat-catcher, of all things. I am in awe. I am adding all her backlist books to my TBR list (sigh). I’m delighted to see that there’s a new Judith Ivory coming out in October, ANGEL IN A RED DRESS.

So here I am, a week away from my kids heading back to school. Not only have I enjoyed this self-indulgent binge on good romances, I am feeling totally stoked to get back to my own works-in-progress!

So has anyone else read these books? What did you think? Have you read anything else noteworthy lately? I’m always up for adding some more books to that endless TBR list!

9 Responses to What I read during my summer vacation