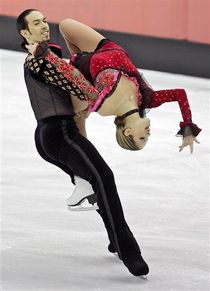 Kathleen Bolton and Therese Walsh of Writer Unboxed make a point that fiction writers can learn from other medias of art and entertainment. I love watching figure skating, and think a well-choreographed ice dance or pairs’ routine has many parallels to a romance novel.

Sadly, in a romance I have read recently, it was as if the hero and heroine met at center ice, then skated off to opposite ends of the rink where they noodled around a bit before rejoining for a kiss at the end. In another it seemed the couple started at opposite ends and spent the entire routine taking baby steps toward one another.

It’s a syndrome writers sometimes call the Sagging Middle. No, it’s not what happens when the writer consumes too many Pepperidge Farm Mint Milanos under deadline pressure. It’s when the writer has problems coming up with a conflict that forces the couple together and makes them work for that happily-ever-after.

If we think about the hero and heroine as ice dancers, though, we’d remember:

Right now I’m trying to figure out what will happen in the middle of my work-in-progress. In the synopsis, this part basically reads, “interesting things will happen here, trust me”.

Fellow writers, how do you attack the Sagging Middle?

As readers, what sorts of conflicts keep you turning the pages?

Elena Greene grew up reading anything she could lay her hands on, including her mother's Georgette Heyer novels. She also enjoyed writing but decided to pursue a more practical career in software engineering. Fate intervened when she was sent on a three year international assignment to England, where she was inspired to start writing romances set in the Regency. Her books have won the National Readers' Choice Award, the Desert Rose Golden Quill and the Colorado Romance Writers' Award of Excellence. Her Super Regency, LADY DEARING'S MASQUERADE, won RT Book Club's award for Best Regency Romance of 2005 and made the Kindle Top 100 list in 2011. When not writing, Elena enjoys swimming, cooking, meditation, playing the piano, volunteer work and craft projects. She lives in upstate New York with her two daughters and more yarn, wire and beads than she would like to admit.
View all posts by Elena Greene →
This entry was posted in Writing and tagged Romance. Bookmark the permalink.

9 Responses to The Dance